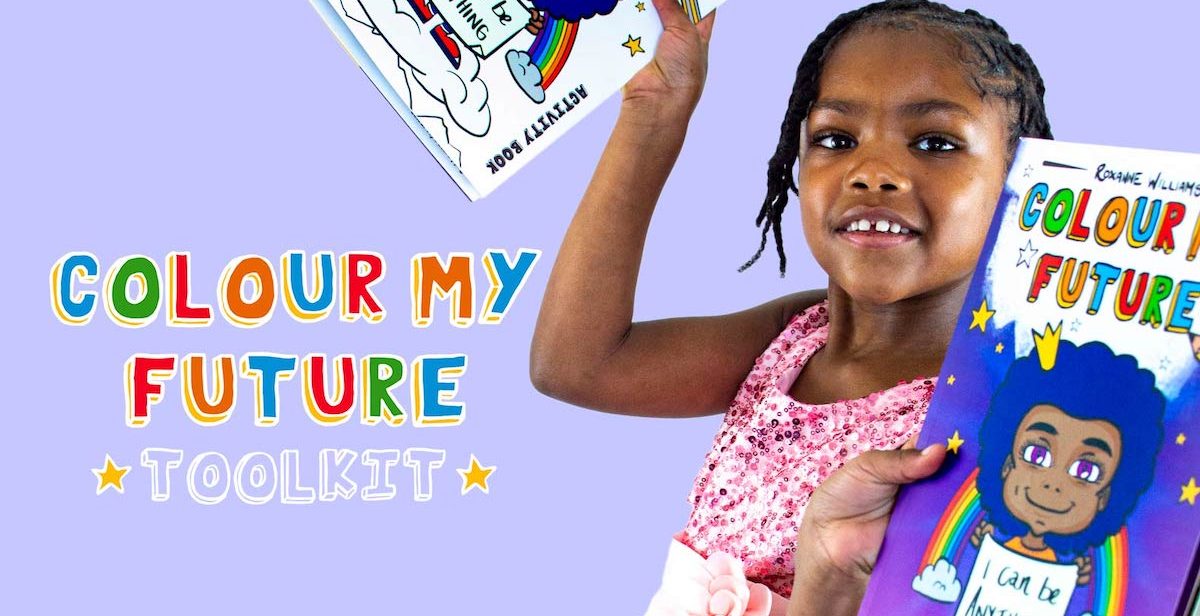 Help all kids dream big with Colour my Future

When her little brother was in primary school in South East London,  emerging black British author and visual artist, Roxanne Williams would take a box full of white T shirts and some fabric pens to the school fete each summer. In the playground, she’d encourage the youngsters to dream big, helping them decorate their own T-shirts with pictures of anything that came into their minds.

She spent many hours drawing pictures of popular cartoons, but, talking to the kids, Williams noticed a lack of aspiration. She recognised this from her own childhood. Her mum and other family members had always empowered her with love and positive affirmations. But going out into the world as a young black girl, Williams realised that expectations were different of her.

A book is born

The seed of an idea was born in that school playground. But it wasn’t until around ten years later that the seed sprouted. After George Floyd’s murder, witnessing the backlash that came from it gave Williams the strong urge to contribute to the bigger picture.

So, during lockdown, she drew the pictures for her book, Colour my Future. Once the drawings were in place, she added words and mantras. “I wrote it in the first person because I feel that mantra repetition is really important,” says Williams. She had always known the importance of ‘I can’. “My mum always told me there’s no such thing as ‘I can’t,'” she says. And that was a lesson she wanted to share with others.

The book is suitable for readers aged three to seven. It follows a young girl who, while drifting off to sleep, imagines the many career choices she has. Every page has an affirmation, and the phrase ‘I can’ is used repetitively to empower readers.

The other important part of the book is its interactive nature. Children are encouraged to write their name at the beginning of the book. This reminds them that this isn’t simply someone else’s story. And at the end, readers have the space to dream big and explore their own aspirations for the future.

Acknowledging we live in a society in which there are huge amounts of doubt and unknowing, Williams spends a lot of her time attempting to demystify the creative process. She loves encouraging artists to collaborate, involving the audience in the creative process, and generally helping people find their own glimmer of creativity.

Sustainable Swimwear: Buy it on This New Platform

“Once you stop learning you’re not really living,” she says. And this is clearly a maxim she lives by. Making art accessible to all is one of Williams’ main aims in life. After all, she says: “there’s no point in progress if it doesn’t bring people with it”. But what about the book? How has it gone down with young readers?

“I sold one to a girl at a craft fair recently,” says Williams. “She  wouldn’t put it down and read it the entire way round the fair!”

Dream big and get your copy of the storybook, the activity book, or the launch pack here.