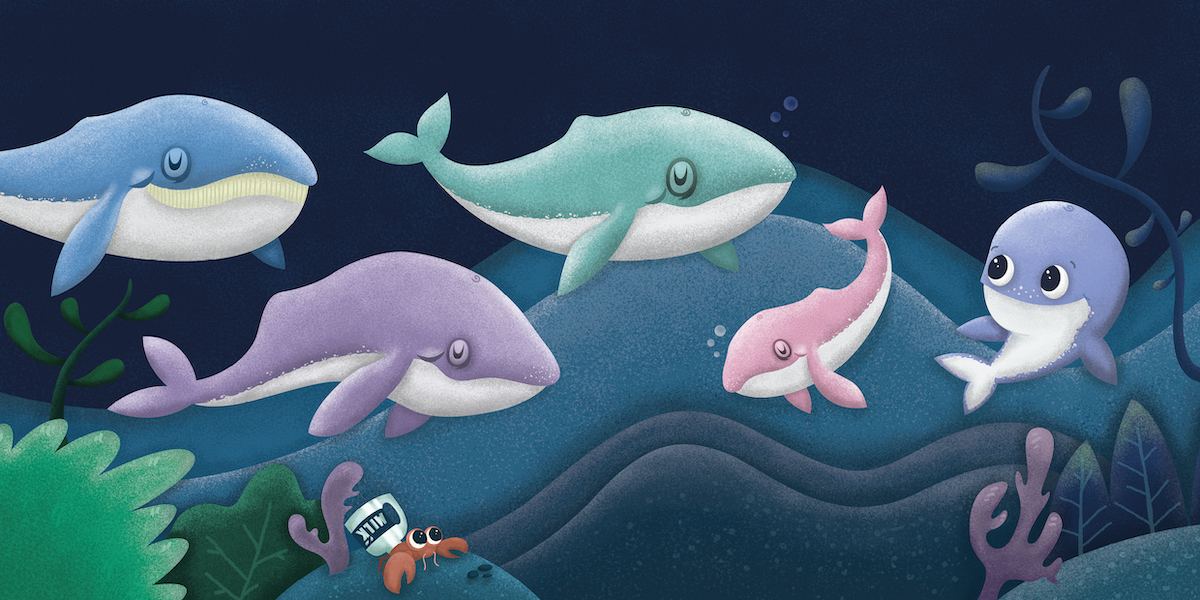 Image by Marie and James Whitehead

Meet Walter: the delightful character teaching kids about plastic in the ocean

“Walter the whale loved to swish through the sea, with all of his pals in his whale pod family”. So starts the children’s book, Walter the Whale and his Plastic Tale. Written by Marie Whitehead, the book tells the story of a baby whale. Like all youngsters, Walter likes to play. And when his tail gets caught on a ghost net, he’s pleased at first. “Look at my fancy and netty new tail,” he cries!

But his happiness doesn’t last long. As Walter moves around the water, his net scoops up pieces of plastic in the ocean. Eventually, he can’t swim at all. The net has weighed him down.

The problem with plastic in the ocean

The plastic problem first hit Marie on a boating holiday to Norway. “We were surrounded by plastic,” she says, going on to describe how it made her feel sick. But it wasn’t until the first lockdown that she had the time to do anything about it. As a graphic designer, Marie lost her work overnight.

Stuck indoors with five grown-up children, Marie read an article about ghost nets. These abandoned fishing nets trap and kill marine animals such as whales. Horrified at such plastic pollution, Marie felt inspired to write her poem. She didn’t know what to do with it at first. But when, later in the year, she read her poem to a friend over a glass of wine, her friend applauded it. And that’s when she knew she needed to do something with her story.

As luck would have it, Marie’s son, James, had just finished a design degree. And he already had some experience illustrating kids’ books. The pair pooled their creativity, and Walter’s tale was born.
It’s a beautifully illustrated book. Packed with plastic objects, from straws to single-use face masks, the book encourages children to have fun finding things they recognise. And parents can use the story to start a conversation around plastic in the ocean.

Why do we need bumblebees? Hello Bumblebee is here to tell you

Marie and James hope the story will inspire youngsters to consider plastic and its disposal. It’s an important topic and one that children may need to educate their parents on, as Marie acknowledges. “If I could give the book to everyone in the world,” she says, “I would”.

Discover more about Walter the whale here and help your kids be part of the change.