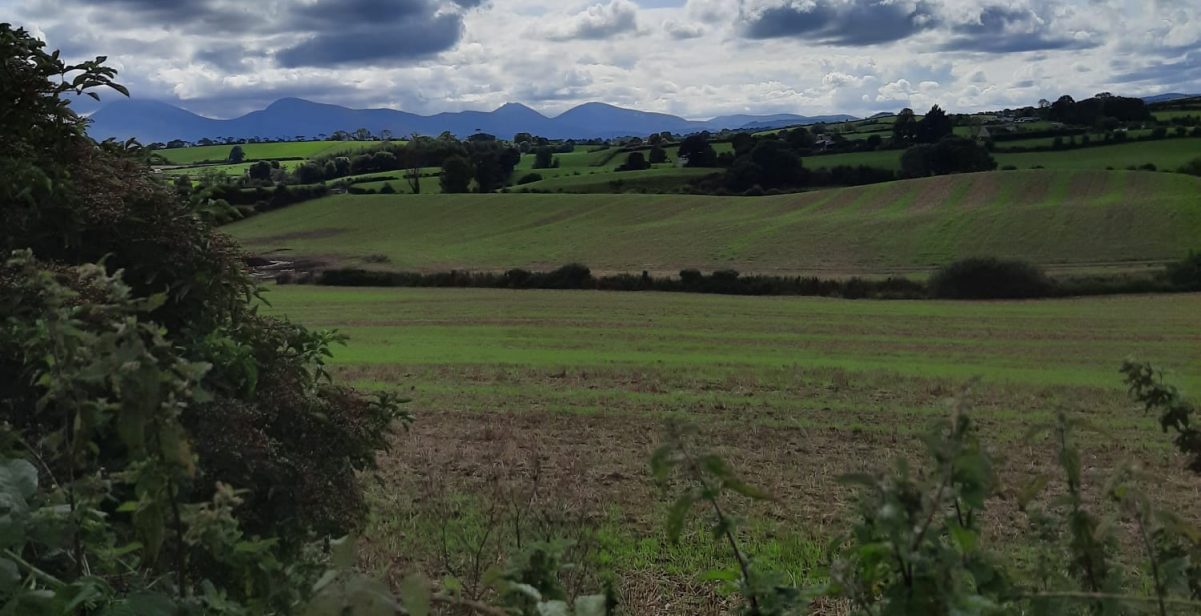 Experts are beginning to recognise climate anxiety. It’s now well documented that climate change and its effects can be overwhelming. And if you’re suffering from eco-anxiety, it’s hard to know what to do. Stephanie McEvoy relates. But, locked down in 2020, she began to wonder whether sustainable farming could help.

Having worked abroad for seven years, Stephanie suddenly found herself back in Northern Ireland. Inspired by her brother who works in renewables, she became fascinated with the idea of carbon retention. She immersed herself in environmental innovation, reading and studying as much as she could. And finally, her brother introduced her to his boss, an environmentalist and wind farmer.

He’d been using cover crops and working the land without chemicals for three years in a quest to improve the soil sustainably. And the results were stunning. Sustainable farming practices may be like those used in the past. But they are not seen as practical. “They’re just not affordable to most farmers,” says Stephanie.

That’s why she developed Farming Carbon. This membership site invites you to fund further research into sustainable farming to show policymakers that it really works. The main thing that puts farmers off trying such practices is cost. There is a period of time between taking chemicals out and returning to the same yield. And that means farmers who want to try sustainable farming need financial help.

Farming Carbon links those wanting to do something for the planet with those who can have the biggest impact: farmers. Most of us don’t have the power to change farming practices. But subscribe to Farming Carbon for £5 a month and you’ll be helping farmers who don’t want to rely on contemporary practices. In return, you’ll get free access to online material. And you’ll be the first to hear about new discoveries and innovations.

What exactly is sustainable farming?

Plants and soil are natural carbon sinks. This means they absorb more carbon from the atmosphere than they release. But thanks to today’s chemical farming practices, nutrition is lacking in the world’s soils. Sustainable farming increases soil health and improves biodiversity. It’s about protecting hedgerows and avoiding chemicals. Instead, sustainable farmers use cover crops and no-till practices to protect root systems. And they carefully manage grazing animals.

Is sustainable farming possible on a large scale?

Sustainable farming is a success story that is already happening. After a year of diverse planting and no chemicals, the soil on the farm has improved. The high carbon levels in the soil make it like “a fluffy Victoria sponge, only black,” says Stephanie. Before the soil was dry and sandy. But now it’s moist and full of nutrients. It now copes better with erratic weather, absorbing floodwater and retaining it through dry spells.

In sustainable farming, fields aren’t ploughed. Instead, farmers plant three or four diverse crops for animals to graze on. For example, turnip grows beneath the soil, kale grows a metre tall, and lettuce grows in the space between. This nourishes livestock whose hooves aerate the soil, leading to better carbon retention. Crops grow close together to encourage competition. And that encourages everything to grow more.

Chariklo: From Burn-out to On-fire

“It’s clear that we need to reduce our consumption,” says Stephanie. But the proposed climate bill in Northern Ireland holds farmers responsible for this. It suggests that farmers should reduce their cattle by 81% by 2045. “That will only drive production elsewhere,” adds Stephanie. She hopes that as well as having environmental effects, sustainable farming will also establish food security and positively impact the local economy.

The future of Farming Carbon

Farming Carbon is still in its beginning stage. By getting involved now, you can be part of the change. One little farm isn’t going to make a huge difference. But Stephanie hopes to inspire more farmers to try sustainable practices. “The change has to come from inspired private individuals,” she says.

What else can I do?

Supporting Farming Carbon isn’t the only step you can take to addressing climate anxiety. Stephanie recommends becoming more informed to start with. “There are companies destroying the forest,” she says. “But there are also people doing incredible things”.

Try to make small swaps. Avoid plastic in your home and choose sustainable alternatives. But don’t feel like a hypocrite if you don’t do things perfectly, Stephanie warns. “The small things you do will always make a difference”.