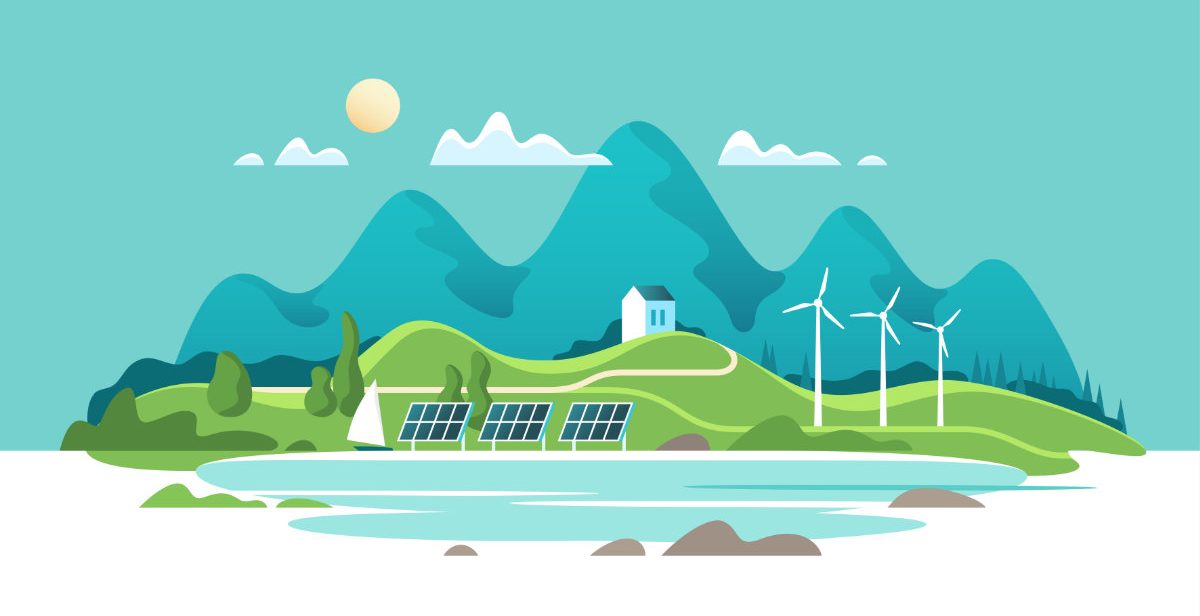 Renewable energy basics: what it is and how it works

4 of the most common renewable energy sources

By OPOH
In Features
5 min read

Man-made climate change is the reason for record-breaking temperatures and even more extreme weather patterns. The need to move away from fossil fuels is more urgent than ever. When burned, fossil fuels release carbon. And this newly-freed carbon builds up in the earth’s atmosphere, trapping the sun’s heat and causing a rise in global temperatures. The result is a complete change in the earth’s eco-system. Renewable energy is the alternative to generating electricity using polluting and finite fossil-fuels.

Clean or renewable energies are energy sources which do not release carbon or other toxic gases into the atmosphere during their operation. They are often referred to as ‘sustainable’ or ‘renewable’ energy sources because unlike burning gas, oil or coal, the energy sources are unlikely to be used up in a short period of time or can be regularly replenished without affecting supply.

Here are 4 of the most common renewable energy sources you will read about.

When you think of renewable energy, solar panels are probably the first things that come to mind. Solar panels convert either light or heat from the sun into electricity that you can use in buildings and homes.

But recent developments mean the market is now expanding way beyond rooftop solar panels. Building-integrated photovoltaics enable the architecture of a building itself to generate electricity. For example, Tesla is currently promoting “solar shingles” for your roof. These, Tesla claims, are three times more durable than conventional roof shingles. And they allow you to reduce your dependence on municipal electricity.

The price of solar panels has dramatically declined in recent years as more countries invest in the infrastructure needed to build and operate them and as their efficiency at converting the sun’s energy into electricity rises.

Solar farms are becoming far more common. Even in cloudy Britain, solar energy farms are due to supply 91,000 homes.

Depending on who you speak to , wind turbines are either eyesores or beautiful pieces of engineering. Harnessing wind power is nothing new – humans have been sailing the planet powered by the wind and cottage mills have been powered by sails for centuries. But the new breed of electricity generating wind turbine is a marvel of modern engineering.

Wind turbines usually stand at about 80 meters tall. And they can harness the force of wind speeds from between six and 55 miles per hour. Kinetic energy from a passing breeze can produce enough electricity to power anything from a small farm to an entire city. Off-shore wind turbines are even more hardy operating in extreme winds which makes them even more efficient and converting natural wind power into electricity to charge your phones.

The sheer size of wind turbines means wind energy is not a viable option for most suburban areas. However, large scale endeavours, such as the citizen-led Danish cooperative wind farm, Middelgrunden, have already demonstrated impressive results. Middelgrunden sources almost half the nation’s electricity from wind energy.

Tidal energy uses the kinetic energy of waves to move underwater turbines that look very much like small wind turbines. Tidal energy is predictable making it an excellent complement to daytime based solar energy generation and patchy wind conditions to generate wind-powered electricity. While we can’t guess exactly when the sun will shine or the wind will blow, the tides will continue to rise and fall in cyclical and reliable patterns until the end of time.

Efforts to use the potential of tidal energy is still in its infancy but shows significant promise. In Scotland, a pilot program has already delivered regular, reliable electricity to 4000 homes. The European Marine Energy Centre has set up a tidal energy test site in Orkney, Scotland as well, making Scotland a hotbed for tidal energy research.

Solar and wind energy ultimately harness the sun’s energy. Tidal energy derives its electricity generating potential from the gravitational pull of the moon. Geothermal energy uses the energy generated by the radioactive core of earth.

4000m below the surface of the planet is the earth’s radioactive core. Believed to be hotter than the surface of the sun at around 6000 C as it continues to decay. The layer surrounding the core – a molten a layer of magma – carries this heat energy to the surface -as erupting volcanoes, hot springs and geysers.

Lurking just a few metres below the surface then is enough energy to power entire cities. Although popular in some Scandinavian countries to generate heat and electricity, geothermal energy has not had the same level of investment and attention as wind or solar. But that could all change. Geothermal energy is constant and therefore more reliable as a source of energy. In California, new projects have sprung up to provide additional renewable energy to complement solar and wind energy as the state looks to become 100% green energy only.

As investment into geothermal continues to rise, it will definitely become cheaper and more accessible.

The future of renewable energy

Countries across the world are taking stronger action to make burning fossil-fuels a thing of the past. In Britain, all new cars sold after 2030 must be electric. In California has made it law to phase out all fossil-fuels by 2045. No single technology will completely generate all electricity needs depending on the natural resources of each area, reliability and cost. However, by using each of the different current renewable energy technologies together the phasing out of our love affair with oil, gas and coal looks every more likely to happen. And it can’t happen soon enough.